Taking a product from an on-premises solution to the cloud is a big challenge for any company. There’s a significant risk that long-time users will make the shift only to end up dissatisfied with the experience, or find that it’s so different that they’re left confused about what to do.

Neither outcome is ideal, and cybersecurity leader Symantec, part of Broadcom Software, wanted to avoid both.

Adam Licata is the product management lead for the flagship endpoint security product, Symantec Endpoint Security Complete. Historically, the product has been offered as an on-premises solution, but as it grew in both popularity and functionality, Symantec’s endpoint team decided to launch a cloud-based version, too.

“This version is truly cloud-native,” Licata said. “We rebuilt the console from scratch, it wasn’t a lift-and-shift to the cloud.” That meant that users who had been using the on-prem version would need to re-learn the software when they decided to switch to the cloud version. No one is forced to use the cloud app over the on-premises solution, he noted, but many do opt for that experience.

To ease the migration experience, Licata wanted to find a way to truly understand the way users engaged with the platform, so he could identify spots where they were getting stuck or running into friction as they made the switch. And, he needed a tool that could allow him to act on that information to drive adoption and improve the product experience.

That’s when he was introduced to Pendo, which had already been in use by other Symantec product teams. From his first login, Licata was blown away by the level of insight it provided into platform usage. “I said, ‘Wow, we can really see how users are actually using the product.’”

The insights Pendo provided helped Licata’s team make decisions around areas of the cloud platform that needed to be fixed or improved, and informed product decisions like which features would be best to build next and whether particular existing features should be retired.

The data also helped the team proactively support customers as they deployed the cloud app. Pendo was able to predict when one of their large customers was about to conduct a major migration to the cloud by monitoring the behavior of those accounts. When a customer downloaded the cloud version’s agent package multiple times—say, dozens or even hundreds of times—the team knew a large-scale deployment was imminent, and proactively reached out to that account to offer assistance before they began their rollout to ensure it went smoothly.

“Ensuring that success is easier to do proactively than reactively,” he said.

Once users have made the switch over to the cloud solution, Licata and team are there to meet and support them with Pendo in-app guides as they start exploring, and learning how to use it.

The team has now built dozens of guides for a variety of purposes, from new user onboarding and feature use tutorials through in-app walkthroughs to release announcements and in-app support. 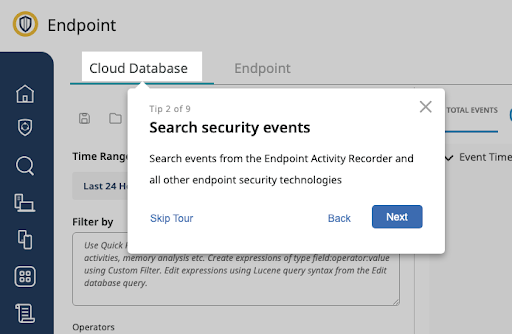 Guides also proved useful in driving up user awareness of underused but important features. First, Licata used Funnels to understand the user journey and figure out why they might not be discovering the feature.

“When we want to know if one of our workflows is not intuitive enough, for instance, we create a behavioral funnel and that shows us that it’s a four-step process to complete the workflow, but completion just drops off a cliff at step three,” Licata said. “We can tell that it’s because we don’t tell them where to go for the next step, and we can see in the Pendo data how big of a problem it is.”

Then, the team builds and deploys guides at strategic points to help users get past the drop-off point and discover the feature. Or, if the page or feature in question is expected to be redesigned, those insights inform the development process. Guide analytics help the team refine these tactics to boost completion rates and feature adoption.

The team is also using Pendo data to identify features that see low adoption to inform their training and webinar strategies. That list of features is used to settle on the topics of their future webinars. “When adoption of a particular feature is lower than we’d like to see, I plan a webinar to highlight it for customers to boost adoption.”

The webinars are promoted using Pendo in-app guides targeted to segments of customers who have not interacted with the feature in question, to ensure only the most relevant users see the promotion. The same segments were later used to gauge how effective the webinar was by seeing what proportion of attendees began using the feature.

“The first time we did a webinar like that, it was the highest attendance we’d seen for any webinar in the last year,” Licata added. Now, he’s seeing such demand from other functions to use Pendo for their own webinar promotion that he’s considering setting up a Pendo governance committee.

Since Pendo’s guides don’t require any coding or help from engineering to design and launch, all of Licata’s work with guides has been able to be executed on the fly, outside typical development windows, too.

Staying close to the customer

Pendo has been a key tool in gauging how people feel about their product and collecting useful feedback to guide future decisions.

Segmenting users based on the size of their organization has allowed the team to understand how larger and smaller customers used the product, so they could make product decisions accordingly and offer differentiated experiences.

Pendo data also allowed the team to quickly understand how newly-released features were being used by different segments, while Pendo’s in-app messaging has made it easy to survey users at scale or conduct customer interviews to get a read on how the new feature was being received or could be improved.

And, Pendo adds a layer of data to the feedback the team gets from both end users and internal stakeholders.

“UX can be really subjective. People will call and tell you that something doesn’t work or isn’t intuitive, but we can pull up the data in Pendo and show that very few people use that workflow or feature, and we can justify why it isn’t as severe a problem as they say it is,” Licata said.

In short, they’re no longer letting the loudest voices in the room dictate their product decision making.

Pendo’s Core Events and Product Engagement Score—a composite metric that gives an at-a-glance view into product health—have proven invaluable to identifying the behaviors that truly lead to customer growth, adoption, stickiness, and retention, and saved Licata a lot of time in reporting each month.

One important user persona for Endpoint Security Complete is the security operations center (SOC) analyst. To quickly and easily report success with this persona, Licata used segmentation to identify them (he considers users who interact with the Endpoint Detection and Response feature more than 20 times in the last three months to fall into this group) and group them together. 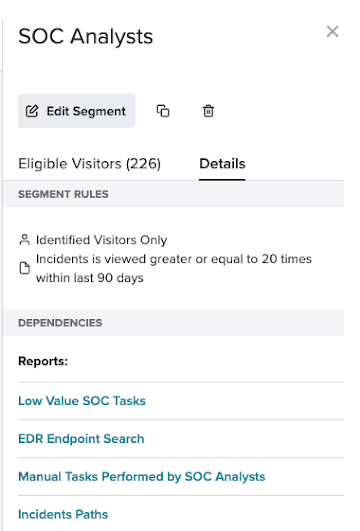 Then, he used PES to track adoption, stickiness, and growth among that segment. 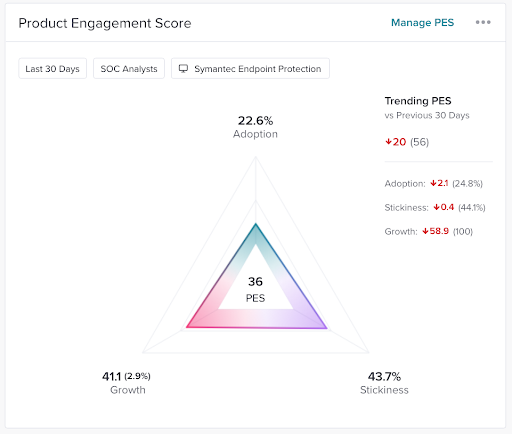 Now, he’s able to quickly pull one single metric to provide executive teams with all the information they need about his product’s performance, rather than spending hours compiling tons of different KPIs and OKRs into a report. “Other PMs are stuck doing lengthy analyses each month. This basically takes 30 seconds of my time,” he noted.

“Pendo has helped us be much more customer-centric by focusing more on feature adoption and customer retention,” Licata said.

In the near future, the team plans to continue that work by streamlining the process of collecting customer feedback with Pendo Feedback.