By using Pendo Feedback to manage their customer feedback, Portal have impressed their customers and improved satisfaction, simply through listening to what they have to say.

Portal by SupplyStream helps professional installers and dealers discover products, connect with suppliers, and manage orders, all from one place.

Portal spent a lot of time managing product feedback without having an actual strategy in place to help them extract the benefits and insights that could lead to an improved product.

They were using a manual system to tally up votes as and when they came in through customer support. As they released new features, the dev team would notify the support team, who in turn would try to notify the appropriate customers.

Their system was inefficient and ineffective, leading to a lot of wasted time and a lot of ideas lost down the drain.

Within a couple of hours Portal were able to integrate Pendo Feedback with their product, adding a “Feature Request” link to their help menu. 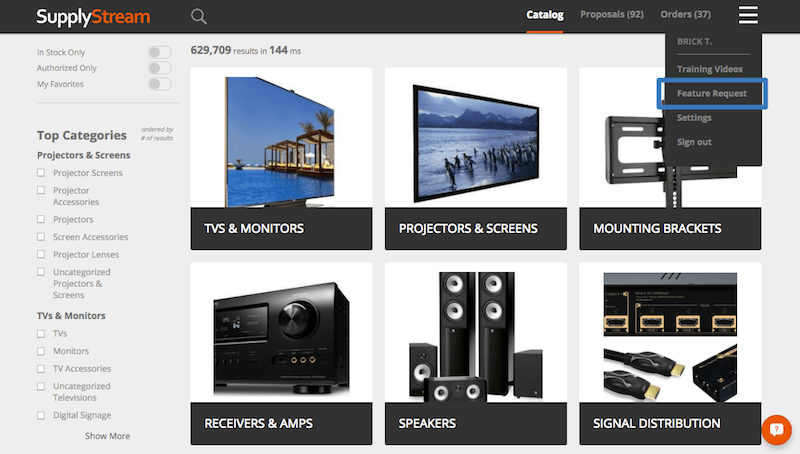 Their customers could then access the Feedback dashboard and were able to submit feedback and feature requests, as well as prioritize and discuss requests from other people.

Managing requests became a simple task for the product team, taking barely 5 minutes a week. They simply review any requests and set a status for them. When requests are released, the status is set to “Released” and any interested customers are automatically notified. Portal’s customer satisfaction has greatly improved since they started using Pendo to listen to feedback. They couldn’t believe that Portal were actually listening to what they were saying.

The customers were made happier by the fact that Portal could improve upon their product, using the data from Pendo Feedback to make the right product decisions.

“There are always features that we think are important and in fact, all of them are important. So it’s nice to rely on actual data. You know that when you build the #1 feature in the Pendo Feedback list, it’s going to be effective because people have actually prioritized it.”

Not only that, but his team saves about 20 hours a month on feedback related tasks, such as collecting feature requests and sending out product updates.