Becky Banasik is the vice president of customer success at Cision TrendKite, an analytics-driven platform that is revolutionizing how brands and media companies measure the impact of their PR.  “Cision TrendKite paints a different picture for PR professionals that they hadn’t seen before,” says Becky. “We let them measure things they hadn’t used before like comparing the number of social shares that a product or a competitor has.  We let PR professionals understand and tell the story of what a brand or a solution has done.” Becky’s team focuses on onboarding and retaining customers in the Cision TrendKite platform.  “We manage the onboarding process to ensure usage.  We have a set of steps around a discovery call, training, and initial setup. We want our customers to be successful and see value.”  Becky uses Pendo to measure customer satisfaction through Net Promoter Scores and understand specifically what customers do in the platform.

Pendo was originally acquired by the product team at Cision TrendKite.  They used Pendo to track feature usage and deploy new feature announcements with in-app guides.  Seeing how Pendo worked, the customer success team was interested in using the in-app messaging capabilities for their own projects.  The first one they picked up was their NPS survey. “NPS is the biggest campaign we run on the customer success side,” says Becky. “We had run it the previous year as an email campaign, but we were intrigued about the possibility of running it in-app.”

As this was still a relatively new campaign, the Cision TrendKite team was looking to establish a baseline measurement of customer satisfaction and identify which customer behaviors in their application led to the highest NPS ratings. They pushed the survey to all of their users–adjusting how it was deployed based on user segments. The customer success team segments their users into “researchers,” “report users,” and “alert users.” “Researchers” and “report users” were served the NPS survey in the application, and “alert users” received it through email. 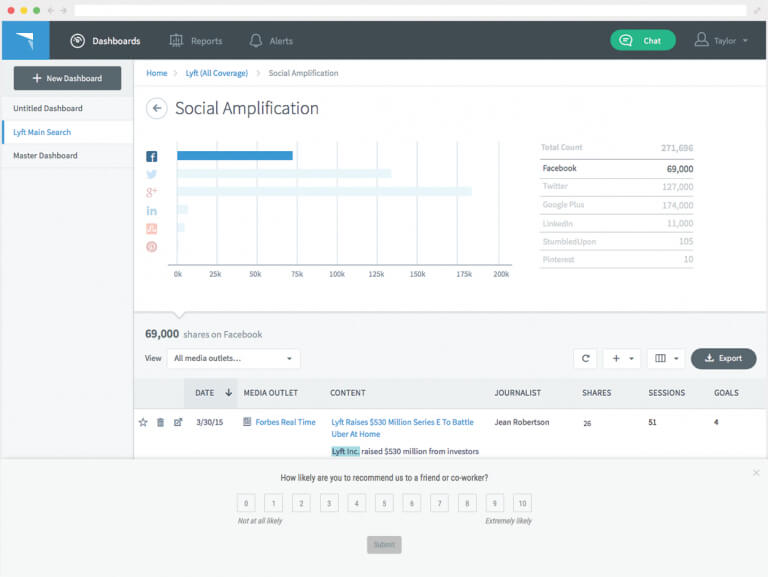 The first result that Cision TrendKite saw was in the response rates. “The response for the in-app survey was really strong. We saw a 20% response rate in-app versus only about 10% for the emailed survey.” The in-app survey also allowed the team to see the responses in real time. “We have a very transparent culture. Each team in the company has a large screen in their area where they share their key metrics. Out of everything we posted for Customer Success, NPS generated the most interest.” 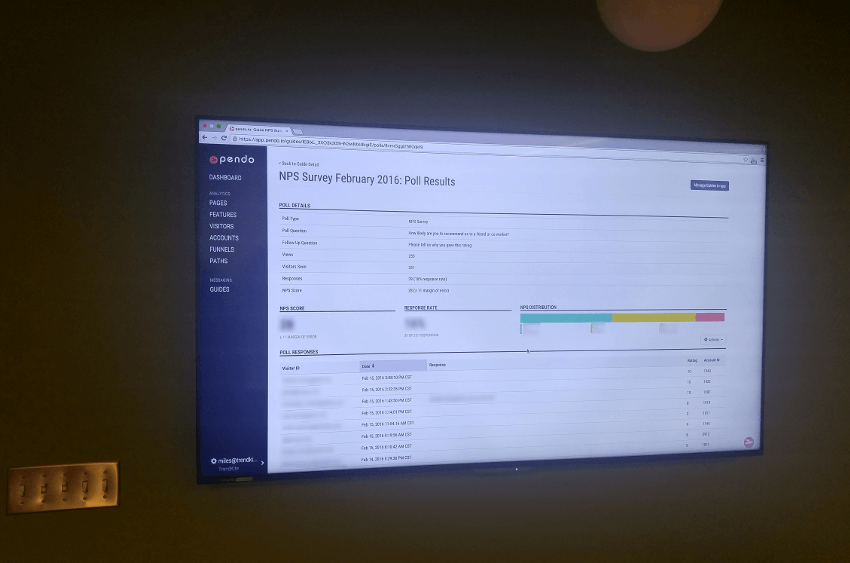 The score on the big screen updated every 5 minutes, and quickly became one of the most popular displays in the office. “The NPS Score display definitely had stopping power. Our VP of development would come by to check the screen every time a new response came in. We were even asked to turn it off when visitors came to the office because it was ‘too distracting.’”

In addition to the shared content through the displays, Becky and her team share product usage information, and an update of NPS scores in their weekly board reports.

Onboarding speed and depth of use–predictors of success

In addition to a baseline measurement of customer success, the NPS survey provides some unique insight into the behaviors of users that were the best predictors of success. “The segments turned out to be really interesting. We analyzed the behavior of users based on their responses to the NPS survey. People that went through the onboarding process more quickly were clearly happier. This caused us to double down on accelerating that process for our customers.”

The Cision TrendKite team also found that depth of use had a significant impact on ratings as well. “Promoters”–those that provided a rating of 9 or 10 in the survey–used a much larger set of features in the application. “Users who were really digging around in the system versus just looking at a report or getting an alert were much happier.”

In addition to the NPS survey, the customer success team has been using data from Pendo as a part of the composite customer health scores that they calculate. “‘Last Visited’ is a key metric that we incorporate into our customer health scoring, and we’re actively looking through the data to find other metrics that are good predictors of customer satisfaction for us.”

“The ability to roll up the data to the account level is a big differentiator for us. None of our other analytics tools can do this. The integration with Salesforce is also really powerful.”

Becky is experimenting with pulling in individual customer success managers and account managers as a way to segment accounts in Pendo, allowing everyone to get an individualized view of their portfolio’s activities. “We want to compare the behavior of the accounts owned by each customer success manager. Whose customers are picking up features the quickest? We want to leverage what’s working for each CSM.”

“We’re all about paying attention to the details. We always want to pick the right things to work on. Pendo helps us do this.”